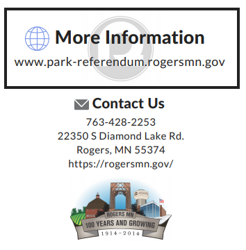 As noted in previous ROYBA communications, the $16MM+ funding package included several projects that will have a direct impact to ROYBA players (ex. South Community Park & Indoor Turf Facility) but there are a myriad of other projects benefiting almost every family in the area.

Now that the it's passed in the MN Legislature, the list of projects will be prioritized by the City Council, plans finalized and construction to begin for the 1st set of projects once the thaw occurs in 2020.

We will keep you posted on how you may be able to influence the  steps along the way, including ensuring South Community Park is high enough on the list to begin in early 2020.